Bad Honnef is a wonderful destination for family vacations and offers a variety of activities for young and older family members. Whether hiking in the Siebengebirge, cycling along the Rhine or a visit to the outdoor pool Grafenwerth, it will not get boring. And if the weather is not so nice for once, there is also a lot to discover indoors!

When the weather is nice, there are many things to do: hiking, biking, or a visit to the swimming pool on the beautiful Rhine island of Grafenwerth. If you don’t want to swim, try a game of miniature golf. On the Rhine promenade there is a small half pipe for all skaters, which invites you to practice. The meadow on Grafenwerth, on the other hand, is ideal to play volleyball or other ball sports. A basketball hoop is also available, along with a large adventure playground at the northern tip.

Soccer golf? Have you never tried it? Then it’s about time! In the north of Königswinter you will find the soccer golf course Bonn at “Gut Heiderhof”. This mixture of golf and soccer is a lot of fun for young and old soccer fans.

Have you ever made chocolate yourself? By reservation you can make your own delicious chocolate at the “Confisserie Coppeneur”! Alternatively, you can take a guided tour of the chocolate production facility.

A little more relaxed is a boat trip on the Rhine! A highlight for children is the trip on the “Moby Dick”, a ship shaped like a whale.

A little further away, the summer toboggan run in Altenahr offers fast-paced fun for everyone. And last but not least, the former federal capital Bonn also offers various options for vacations with children. Information on this is available at the “Bonn Information”.

A visit to a wildlife park or zoo should not be missed during a family vacation. Directly across from Bad Honnef lies the small town of Rolandseck, which, in addition to the ARP museum and its historic train station, is home to a beautiful forest and wildlife park with a view of the Rhine. Besides red and fallow deer, as well as alpacas and mouflons, even Scottish highland cattle live there. You can take a relaxing walk through the park, where many of the animals are free to roam. The park can be reached by ferry from Bad Honnef, a steep climb leads to the entrance.

At the ostrich farm “Gemarkenhof” in Remagen, you almost feel like you are in Africa. With one of the farm’s own small trains, the ride begins across the farm with a stop at the breeding animals before it goes to the large herds of different ages, where contact is allowed. The tour continues to the ostrich nursery before concluding with the highlight of the tour: the hatching room, where chicks almost always hatch.

In Königswinter, directly on the Rhine at the level of the Rhine ferry, the wide world of the oceans awaits us! In “Sea-Life” Königswinter, more than 2,000 ocean animals from various regions of the world await us, and in the 360° acrylic glass tunnel, you will seemingly swim through the depths of the ocean alongside wreckfish “Horst”.

A visit to the zoo is an experience for young and old. Cologne Zoo is considered to be the third oldest zoo in Germany today and is involved in many projects to preserve endangered species. Neuwied Zoo is the largest zoo in Rhineland-Palatinate and is home to over 1800 animals representing more than 185 species. 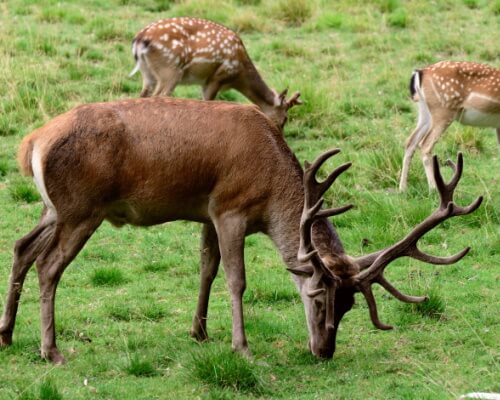 Have you ever visited a real castle? High above the Rhine and Königswinter sits Drachenburg Castle. Although it looks much more ancient, it was built from 1882 to 1884 and can be visited today. The architecture as well as the residential and common rooms give a feeling of earlier times. On the way down to Königswinter, we pass the Nibelungen hall with its dragon cave and reptile zoo.

Oh how beautiful is Panama – the picture book museum at Wissem Castle near Troisdorf holds the world’s largest collection of original “Janosch” drawings. This unique museum specializing in artistic picture book illustration, historical and modern picture books, as well as artists’ books, also has a park with wildlife enclosures and an adventure playground.

In the fairy tale forest in Bad Breisig, you can experience a selection of the most beautiful Grimm fairy tales on a tour of the so-called adventure trail. The artist Willy Zeh implemented the fairy tales’ presentation with the help of old originals. The moving and talking figures are handcrafted. At the push of a button, the characters narrate a scene from the fairy tale, voiced by none other than Konrad Beikircher.